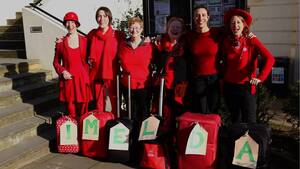 [The ‘Speaking of I.M.E.L.D.A’ group last Saturday, outside the Camden Irish Centre in London, top, and (above) disrupting the ‘Dissonant Voices’ conference inside]

“Speaking of I.M.E.L.D.A*. is a direct action feminist performance group that seeks to challenge the ongoing problem of ‘Ireland Making England the Legal Destination for Abortion’. We operate against the shaming and silencing of women who have had abortions in the Irish region and more widely.
“On International Women’s Day, [March 8] we intervened in a conference at the Camden Irish Centre. This conference was titled Dissonant Voices: Faith and the Irish Diaspora. It was led by a group of Catholic clerics who see themselves as ‘radical,’ as well as ‘politically and socially engaged.’ “

*’Imelda’ was the name for abortion used by the Irish Women’s Abortion Support Group, active in London between 1980- 2000.