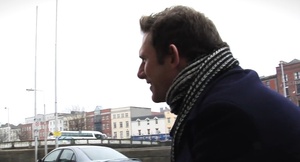 Soon after moving to Dublin Fergal developed a fascination with the river Liffey. During the 2008 economic meltdown, Fergal’s art project Liffeytown, comprising lifesize Monopoly houses floating on the Liffey, received worldwide attention, as it was seen to symbolize the state of the Irish economy. In another project, Fergal constructed a small island in the Liffey and lived there for a week. We went for a cycle with Fergal along the Liffey to discuss his newest idea: turning the Liffey Quays into a park, thereby replacing the current six lane motorway by a ‘Ribbon of Green’.

Related: One Man’s Love Affair With The Liffey

Get Out Of The House

Voice Of The Traveller