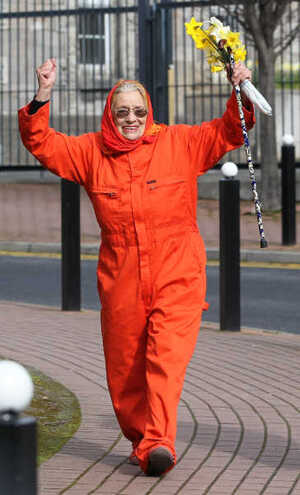 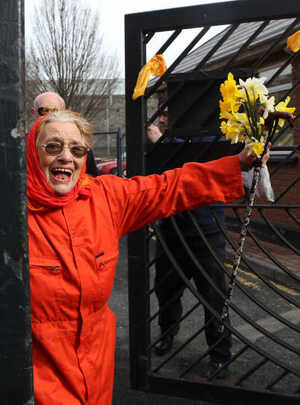 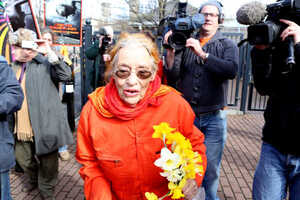 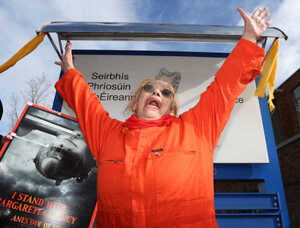 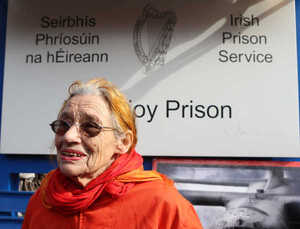 Margaretta D’Arcy, 79, walks out of Mountjoy Prison in Dublin this morning after serving nine and a half weeks of a three-month sentence.

She was jailed for refusing to sign a bond to uphold the law and keep away from unauthorised zones at Shannon airport.

“It is a fact that illegal ‘extraordinary rendition’ CIA teams travelled via Shannon en route to kidnap individuals and transfer them to torture venues. This is in contravention of the European Convention on Human Rights and the UN Convention against Torture.  Our Government has turned a blind eye. They are complicit in these crimes.”

“President Michael D Higgins has called on Irish citizens to have ‘conversations’ in public places as part of active citizenship. I have sat on a runway, had a court hearing and gone to prison in an attempt to have this ‘conversation’.”

“I am facing another trial in exactly three months’ time. I hope to continue this conversation/dialogue with the Irish people and our Government and judiciary, and to highlight what we have sacrificed as Irish and world citizens by allowing this colonising of our airport for illegal and immoral purposes.”

“I will also be highlighting the conditions in our prisons, which I have unfortunately been able to experience in both Limerick and Dublin.”