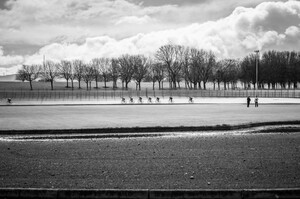 By Tom Beary who writes:

“Sundrive Velodrome is the Home of Track Cycling in Ireland. It is located in Eamonn Ceannt Park, (known locally as Sundrive Park), Sundrive Road, in Crumlin. Measuring 460 metres, it was specifically designed and built for the sport  Originally, a grass track dating from the 1920s, tarmac was later added in the 1950s which has given the distinctive shape known as a velodrome. This is the oldest cycling track in existence in Ireland.”.

Somewhere Between Kilcock And Enfield

Last Of The Rainbows