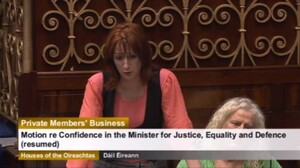 “There is a young woman in the gallery who has travelled from England – a woman who Minister Shatter represented when she was a child, a woman who was sexually abused horrendously by her father, a young woman called Sarah Bland. And Sarah and her mother have provided detailed statements to the Gardai in relation to serious allegations against Minister Shatter in relation to perverting the course of justice, obstructing the course of justice and other serious matters. Now this is one of a number of horrendous cases that remain unresolved with the State. There’s too many for us to deal with in a matter of minutes. And to listen to the Taoiseach earlier talk about the Government moving speedily and decisively is quite simply sickening.”

Clare Daly in the Dail yesterday.