The Battle of Clontarf.

Mick Liffey, of the HistoryHub.ie, writes:

With the millennium celebrations of the Battle of Clontarf coming up in the next few weeks your readers might be interested ina History Hub video which takes a close look at 1014. It features UCD medieval historian Elva Johnston who explains why Brian Boru was an important figure; what the battle was about; who fought it; and how the story of the battle was reshaped by Brian’s descendants.
Elva argues that the Battle of Clontarf was an internal struggle between rival, though closely related, power bases from within Ireland itself, rather than an Irish effort to repel a Viking invasion. Brian Boru’s two main opponents at the Battle of Clontarf were Máel Mórda (King of Leinster and Brian’s brother-in-law) and Sitric (Hiberno-Norse King of Dublin and Brian’s son-in-law). The graphic (above) shows how closely related the main figures on both sides were to each other….” 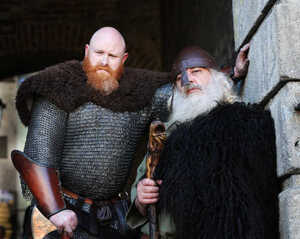