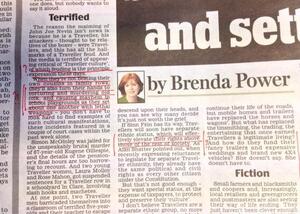 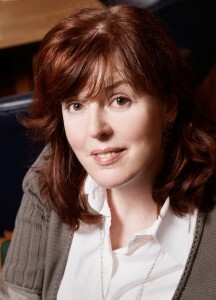 Journalist and broadcaster Brenda Power appeared on RTE R1’s Liveline this afternoon to discuss the reaction to her column in the Irish Daily Mail yesterday which has been  condemned by the Irish Council for Civil Liberties and the Equality Authority for its portrayal of the travelling community.

Joe Duffy: “Were you surprised Brenda, when the Equality Authority – no less, issued a statement yesterday calling your article in ‘The Daily Mail’, shameful and that it should be withdrawn immediately?”

Power: “Was I surprised? No, not at all.

Power: “This was sort of par for the course for the Equality Authority and the Civil Liberty Council for civil liberties – to basically close down any criticism, any discussion, any debate on the lifestyle of Travellers, and specifically with regard to the so-called ‘feuding’ that goes on – at the week end as we saw, which led to John Joe Nevin being put in a wheel chair after he was attacked, and had both his legs broken with a nail-studded bat. No, not all, you know, the crime here appears to be commenting on this kind of savagery – but not actually conducting it. And so, no, that doesn’t surprise me at all.”

Joe Duffy:” You say, ‘Imagine Brian O’Driscoll had been set upon at the week end by a couple of thugs, one wielding a golf-club, the other wielding a wooden bat studded with four inch nails and while one held him down, the other smashed his leg in two places – imagine the injury was so severe that the jagged spear of broken bone was left poking through the broken skin of his leg’. We now know John Joe has two broken legs – but what’s your theory, what’s your thesis there Brenda?”

Power: “The point I was making was that the media, more or less ran shy of calling this what is was and there wasn’t, it seems to me, the same level of outrage of indignation that there would have been had this happened to any other sportsman – and had it been done, carried out by anybody else. And you know you can’t say… and you know since nobody has been charged, although there were a couple of arrests – they were released without charge – so it’s not that the debate has been closed down on this matter, because it’s before the courts – it was closed down for precisely the reasons that it said in my article. As soon as you lift your head above the parapet and say, ‘This Traveller feuding is another word for absolute savage barbarity and has got to be stopped’ you are leaped upon by the Equality Authority and the Irish Council for Civil Liberties.
Could I make another point Joe, it’s interesting that Equality Authority, I didn’t see their statement – I think they said that I was ‘inciting risk’ and they accused me of inciting risk. I would say that if anyone is inciting risk here it’s them. They’ve singled me out to be targeted by a group of people who are not exactly known for settling their disagreements with debate. They settle their disagreements with machetes and slash-hooks.”

Joe Duffy: “Who settles their disagreements with machetes and slash-hooks?”

Power:“The ‘Feuding Travellers’, the people that I am specifically targeting in my article.”

Duffy: “Yeah, but who would you say is specifically targeting you?”

Power: “Well, I mean, I’m saying that the Equality Authority, by singling out my article saying you’re not allowed to say this, that this is outrageous.”

Duffy:“Do you believe Brenda, that the Equality Authority has put you in personal danger?”

Power: “Yeah, I think so – yeah, I’d say they had. And but I mean, my rights really don’t matter here – you know, so long as I’m not allowed to say, to express my opinion. Because that’s what it’s about Joe, it’s about free speech. I’m expressing an opinion, based on an incident. Not only the incident that happened at the weekend, as I mentioned in the piece, not one, but two, two court cases that arose involving Travellers, in the past week. One of course, was one involving Simon McGinley’s savage, barbaric torturing to death of an elderly man in Sligo.
The other was… passed under the radar, more or less – if it hadn’t been for a pretty flippant comment made by the judge about the two women involved who had taken up knitting. That was a situation, just to remind you, because you don’t really get much coverage of the trravellers feuds.
A group of men had turned up in the playground of a school yard as children were being collected after school. They set upon each other with machetes and slash-hooks, including, by the way, a 13-year-old boy whom some adult had armed with a slash-hook – one man ran into a classroom, barricaded himself in with a 5-year-old and their teacher. And you know this just kind of passed under the radar because it was a ‘Traveller Feud’. And these women got suspended sentences for their involvement in this case.
So, I mean, as far as I’m concerned, that child, that 13-year-old with the machete, his civil liberties have been compromised, why is he not in care,? Why are the people who gave him that instrument not behind bars? We wring or hands  about the child soldiers in Sierra Leone and the Central African republics and Rwanda 20 years ago, here are children being given machetes by adults in this country – and you’re not allowed to criticise it, you’re not allowed to raise your voice against it, or the Equality Authority or the Council for Civil Liberties and PAVEE Point telling you you’re going to be incited for hatred, Joe, that’s absurd.”