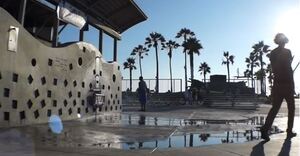 Once Love, Twice Shy by Karmacloud.

Video shot in Venice, California by Julianne Forde and in Leiden, Netherlands by Karmacloud.

“This is the first from a folk trio called Karmacloud, who hail from a combination of Ireland, Holland, and Denmark but met and formed in Berklee College of Music in Boston (aka the best music school in the world). Their Irish link is a certain Dan Forde, who’s previously played in Slow Skies and wrote the music for Collapsing Horse’s wonderful Monster Clock. They’re playing their first ever Irish gig next Thursday, April 17 in the Back Loft, on St Augustine Street, Dublin. Since they live in three different countries across two continents, it’ll likely be our only chance to see them for a good while.”