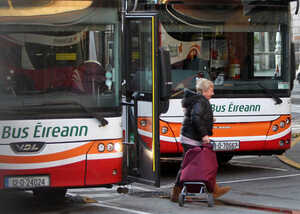 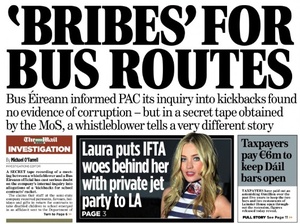 Michael O’Farrell, of the Irish Mail on Sunday, was on RTÉ One’s Morning Ireland earlier to discuss his story about a whistleblower who claimed staff at Bus Éireann received payments, favours, holidays and gifts in return for contracts to take disabled children to school.

The whistleblower’s claims were made in an affidavit sent to the Department of Transport last year. The semi-State company launched an internal investigation which concluded there was ‘no basis’ for any disciplinary action or for the gardaí to be notified.

Bus Éireann’s CEO Martin Nolan subsequently wrote to the Public Accounts Committee to notify it of Bus Éireann’s conclusions and stating that the whistleblower had “withdrawn his allegations”.

Michael O’Farrell: “Well, the story re-emerged this week because of a secret tape which we obtained of an interview between the Bus Éireann investigation panel and a particular whistleblower whom they interviewed. Now, the contents of that tape appeared quite significantly at odds with the conclusions of the Bus Éireann investigations, that Bus Éireann CEO Martin Nolan sent to the PAC and it’s those things that are at odds, that appear to be… the reason that this has now emerged.”

Rachel English: “You have had this tape for a while, so why has it become significant now?”

O’Farrell: “Until we knew what was the result of the investigation, the tape didn’t really have any significance, it was simply an interview process. But, when we saw that Martin Nolan told the PAC, for example that the whistleblower had withdrawn his claims, we knew, on the tape, that that wasn’t the case. When we saw that Martin Nolan had denied making any improper payments, it’s clear, when you listen to the tape, that that’s not the case. The whistle-blower in fact, does detail some gifts and services that he provided, or that he allegedly provided in return for keeping his contracts – and it’s also clear when you listen to the tape that the whistle-blower did not accept, as Martin Nolan told the PAC, that he had lost his contract in a fair tender. In fact, he maintains throughout his interview that he claims he’s been the victim for not contributing to a specific……”

English: “Can you tell us a little more about this – what does this man allege was going on at Bus Éireann?”

English: “And what has Bus Éireann said then, about these allegations?”

O’Farrell: “Officially, to the PAC, Martin Nolan said that there was not enough evidence to refer to gardaí. Bus Éireann have always denied that these kind of practices can occur within the company. But going back years, there have been hints that these improper activities do occur – and it’s pretty clear that a real independent investigation has never taken place. I think this matter now is being referred to the gardaí by ministers and it’s probably the right place for it. In fact I’m aware of an investigation that the gardai would be able to pursue in this case.”

English: “And the man at the centre of this, is he prepared to go to the gardaí?”

O’Farrell: “Yes, in fact the man at the centre of this has a partner, or colleague who has made similar allegations. That person has already had a couple of informal meetings with the Fraud Squad. The two individuals have also… they’re receiving legal help from Transparency International who is preparing a formal case for the Fraud Squad and it seems as if an investigation will launch quite shortly.”

“He Looked As If He Was Dying”