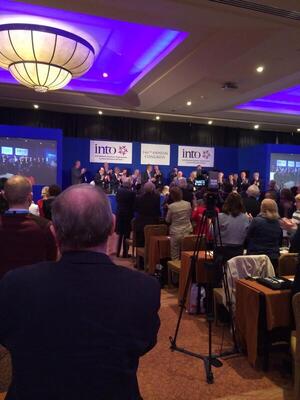 #2014INTO gen sec Sheila Nunan raises the roof defending women teachers: “the boys that did the honours maths led this country to ruination”

Tweets from the annual conference of the Irish National Teachers’ Organisation in the Lyrath Hotel, Kilkenny.

RTÉ’s education correspondent Emma O’Kelly reported on the conference on RTÉ’s News at One earlier:

“There were also times where there were mutterings of discontent, there were groans from delegates, one of those key moments was when the minister said that he wanted to see Higher Level Maths at Leaving Cert to become a requirement, a minimum entry requirement, for teacher training in the colleges. Now, to that, he was met with moans and mutterings. The minister compounded this by going off script and addressing the delegates saying “I’ll tell you why” and he went on in his explanation to refer to a “highly feminised audience and profession” and this, really, the delegates took umbrage at this. They didn’t take kindly to these remarks, there was a lot of groaning and noise in reference to that.”

“Now, when [General Secretary of INTO] Sheila Nunan was responding to the minister, she summed up a lot of that umbrage by saying, she began, in a very colourful speech, she said: “Sisters, hell hath no fury”, and she went on to say that, “we understand the simple sums, such as 30 into one doesn’t go”, of course there she’s referring to class size. She said: “The sum is that we’re looking for more funding.” And she also said: “It wasn’t the girls who didn’t do the Higher Level Maths that led the country to ruination.” She said: “It was the boys who did the Honours Maths that did this”. So this was received with rapturous applause from delegates.”

Read Minister Quinn’s prepared address to the INTO conference here