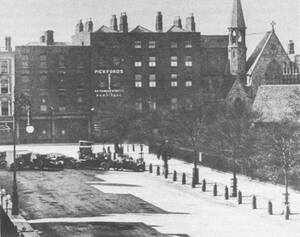 “I awoke into full insurrection and bloody war, but I did not know anything about it.

At one o’clock I went to lunch.

On the way home I noticed that many silent people were standing in their doorways—an unusual thing in Dublin outside of the back streets….

As I drew near the Green rifle fire began like sharply-cracking whips…In the centre of this side of the Park a rough barricade of carts and motor cars had been sketched. It was still full of gaps. Behind it was a halted tram, and along the vistas of the Green one saw other trams derelict, untenanted…

Just then a man stepped on the footpath and walked directly to the barricade. He stopped and gripped the shafts of a lorry lodged near the centre. At that instant the Park exploded into life and sound; from nowhere armed men appeared at the railings, and they all shouted at the man.

These were the cries. The man did not let out. He halted with the shafts in his hand, and looked towards the vociferous pailings. Then, and very slowly, he began to draw the lorry out of the barricade. The shouts came to him again, very loud, very threatening, but he did not attend to them.

“He is the man that owns the lorry,” said a voice beside me.

Dead silence fell on the people around while the man slowly drew his cart down by the footpath. Then three shots rang out in succession. At the distance he could not be missed, and it was obvious they were trying to frighten him. He dropped the shafts, and instead of going away he walked over to the Volunteers.

“He has a nerve,” said another voice behind me.

The man walked directly towards the Volunteers, who, to the number of about ten, were lining the railings. He walked slowly, bent a little forward, with one hand raised and one finger up as though he were going to make a speech. Ten guns were pointing at him, and a voice repeated many times:

“Go and put back that lorry or you are a dead man. Go before I count four. One, two, three, four.”

A rifle spat at him, and in two undulating movements the man sank on himself and sagged to the ground.

I ran to him with some others, while a woman screamed unmeaningly, all on one strident note. The man was picked up and carried to a hospital beside the Arts Club. There was a hole in the top of his head, and one does not know how ugly blood can look until it has been seen clotted in hair. As the poor man was being carried in, a woman plumped to her knees in the road and began not to scream but to screetch.

At that moment the Volunteers were hated. The men by whom I was and who were lifting the body, roared into the railings:—

“We’ll be coming back for you, damn you.”

From the railings there came no reply, and in an instant the place was again desert and silent, and the little green vistas were slumbering among the trees.”

From James Stephens’  ‘The Insurrection in Dublin’ (1916)