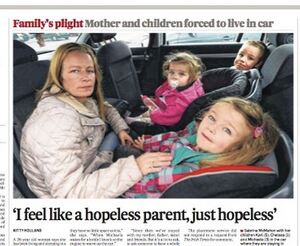 Sabrina McMahon, who says she was forced to sleep in her car with her three children last week, spoke to Niall Boylan on 4FM earlier today and their discussion shed more light on her predicament.

It came after a ‘good samaritan’, who wishes not to be named, came forward and paid for Sabrina, a former dental nurse and carer, and her children to stay in Bewley’s Hotel for the next four weeks.

Niall Boylan: “How old are your kids by the way?”

Sabrina McMahon: “I’ve a five-year-old, Karl, he’s a boy, and then I have a three-year-old, she’s only gone three since January, and I’ve an 18-month-old girl as well.”

Boylan: “God, your hands are full, certainly. Give us a little background if you can, Sabrina, and how you ended up in this situation in the first place. You were originally living in Kildare weren’t you.”

McMahon: “To my father’s, and when we went back up to Athy, junkies had taken over the house. They had smashed up the whole house and totally, totally ruined the house.”

Boylan: “OK, this was the house that you were renting at the time was it? Yeah?

Boylan: “OK. So were you getting rent allowance then from…”

McMahon: “No, sorry, I wasn’t renting the house, I was supposed to be buying it.”

McMahon: “Then seven years later, after me coming back down to Dublin for the Christmas, when I went back up, after the house had been vandalised and everything, I had rang the bank and I told them I wasn’t going to stay there and..”

Boylan: “OK, so who was paying for the house at that time that you were living in it?”

McMahon: “I was. I thought I was paying, like I paid a solicitor, in 2005, 2,900 pound, thinking that I was going to be paying a mortgage. I got a piece of paper off him, I thought that was the deeds of the house and then seven years later, when I phoned back up – after the people had wrecked the house – I was told that the house, I’d never signed any deeds to the house.”

McMahon: “Yeah, yeah, it was me who was paying for it.”

Boylan: “All right, OK, so you were paying a kind of rent every week then obviously, or every month?”

McMahon: “A mortgage it was.”

Boylan: “A mortgage. Right. Ok. And you were working at the time then, were you?”

Boylan: “All right, OK. So what happened then, your relationship broke up?”

McMahon: “The relationship. Well it wasn’t that it broke up, he walked out on us.”

McMahon: “I’m on the council list over a year now.”

Boylan: “Over a year. OK. And in the interim have they offered to give you a rent allowance to get you to rent somewhere in the meantime?”

McMahon: “They have, and even the council have said themselves that there’s nowhere accepting rent allowance. No landlord will accept rent allowance.”

Boylan: “Yeah, they are landlords who’ll refuse to accept it for whatever reasons. Yeah, they have different reasons for refusing people on rent allowance, I don’t know why they do that. It’s kind of a bit of snobbery I think more than anything else.”

McMahon: “Haven’t been able to find anywhere to live, no.”

Boylan: “OK, well, you see, because the story kind of makes out in the paper that, you know, you’re being left homeless but it’s just a case of not being able to find somewhere, is it?”

McMahon: “I’d to go back up there, onto the homeless, up there, try get a house up there, reschool my kids, my three-year-old child, she needs speech therapy, I’ve been waiting a year and a half for that, and she’s due that next month, and they told me I’d have to get all that done back up in Athy. I’m isolated up there…”

Boylan: “So what are you hoping to get? Are you hoping that the council will kind of bump you up the list a little bit and will give you something in Dublin, in Tallaght is it?”

Boylan: “But why were you sleeping in the car? When there was an opportunity I suppose, when you had the rent allowance, if you needed to go back to Kildare, you have relations here, your parents are here and your sister I think lives here as well.”

McMahon: “Nobody is allowed let anyone stay in their house. The council has even told me that, that I shouldn’t have been staying in anyone’s house at the start, that if you stay in anyone’s house, they’re going to be charged for rent.”

McMahon: “If you have another person staying in the house.”

Boylan: “Oh right because they’re on rent allowance as well at the time, is it?”

Boylan: “Oh right, OK. So if they have you, you’re technically a lodger, so they should be charging you.”

McMahon: “OK, all right. Well it’s all jumping through loopholes.”

Earlier: A Litany Of People In The Same Position

Smashie And Not Nicey

“A Litany Of People In The Same Position’