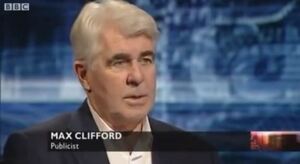 The 71-year-old was cleared of two counts and the jury at Southwark Crown Court was unable to reach a verdict on one other. He becomes the first person to be convicted under the high profile Operation Yewtree sex crime investigation.

…in a clip not shown until today the publicist is seen creeping up on Sky News correspondent Tom Parmenter during the trial.

“She’s The Mother Of A Young Child As Well…That Doesn’t Look Great.”