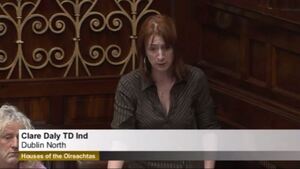 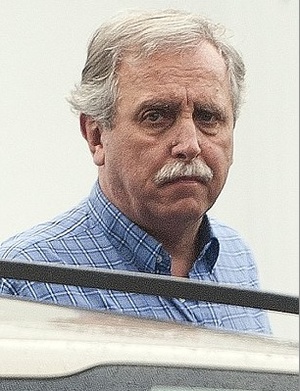 [United Left Alliance TD, Clare Daly (top) and Alex Marunchak (above) former Irish editor of the News of the World]

In the Dáil yesterday, United Left Alliance TD Clare Daly asked the Minister for Justice and Equality Alan Shatter if he plans to introduce legislation to ensure phone hacking by any media organisation in Ireland would result in serious penalties. She asked this question in light of civil actions being taken against News International in Britain which, she claimed, are related to hacked material sourced by the company’s Dublin office.

Mr Shatter told Ms Daly the gardaí have received no complaints in relation to the matters she raised, and encouraged her to give him any information she feels he should be made aware of.

Ms Daly said it’s her understanding that complaints have been made, that ‘serious information’ has been given to the authorities and that she believes Mr Shatter’s department already has this information.

She also claimed a former editor of the News of the World in Dublin Alex Marunchak was connected to several Garda informants.

Clare Daly: “The background to this question is the Leveson inquiry in Britain, which was the British response to the very serious issues of phone hacking and information being obtained by media outlets in a manner which breached privacy and caused major concern. It is acknowledged at this stage that large amounts of the hacked material were either sent to or commissioned from News International’s Dublin office. In light of that, what will the Minister or his Department do to investigate these very serious concerns and protect Irish citizens?”

Alan Shatter: “I am, of course, aware in general terms of information which is in the public domain relating to the organisation named and which I understand to have been the subject of a public inquiry and also criminal prosecutions in the United Kingdom. Such a prosecution is still taking place and it would be entirely inappropriate for me to comment on matters which are the subject of proceedings, either civil or criminal, in another jurisdiction. If the Deputy has any information regarding unlawful activity in this jurisdiction, the appropriate course of action is for her to furnish that information to the Garda Síochána, which can then properly assess and act on it, as appropriate. With regard to future legislation, a criminal justice Bill is included in the Government’s legislative programme which will transpose EU Directive 2013/40/EU on attacks against information systems. The Bill will create a range of offences to protect information systems and data from illegal access and interference. The definition of ‘information system’ in the directive is extremely wide and will encompass modern communications systems. The directive also provides for the liability of bodies corporate in relation to the offences created. The Bill is at an advanced stage of preparation and I hope to be in a position to publish it in the autumn.”

Daly: “I am a little bit shocked at the Minister’s flippant response to a very serious situation. He should be aware that shortly after he took office the “Panorama” programme furnished serious information which revealed, without any question or doubt, that substantial amounts of information were emanating from the Dublin offices of News International. The office was presided over by a Ukrainian individual, Alex Marunchak, who had MI5 clearance and operated with MI6. He was very close to Fianna Fáil and the previous Government. This individual is now the subject of criminal charges of phone hacking in Britain. The evidence is unequivocal that he has employed a network of hackers to gain information illegally to be presented in a slanted way, and, in the Irish context, a politically motivated way, targeting Mary McAleese and Peter Hain. If the Minister does not think it is a matter for investigation that this news outlet operated in this city, around the corner from Leinster House, and had very close relationships with the previous Government, particularly Bertie Ahern’s administration, he needs to look more deeply into it because these matters involve massive breaches of privacy. The Minister must contrast his non-response with the response of the British Government in that regard.”

Shatter: “The Deputy constantly confuses the investigative and operational roles of An Garda Síochána and my role as Minister for Justice and Equality. I am advised the Garda received no complaint regarding the matters the Deputy raises. I take with great seriousness the breach by any news media of individuals’ privacy, and any action that could detrimentally impact on the lives of individuals, particularly where the information is false or is obtained and contrived to be put into a narrative to do individuals down. I take that with the greatest of seriousness, as I do, in particular, aspects of information that might impact on people’s private family life, or tragedies that occur in their lives. In the context of matters being criminally prosecuted in Britain I will not say anything – and I ask the Deputy to be cautious in how she articulates these matters in this House – that could prejudice issues before the British courts, and which could be interpreted as so doing, to the benefit of individuals who are facing serious criminal charges. I will not say anything in this House that could be so interpreted. If there are issues of illegality and if there is an investigation that An Garda Síochána should conduct in this context, a formal complaint needs to be made to the Garda. If the English authorities are investigating issues effectively, with the result that appropriate individuals are being brought before the courts it is for the Garda to determine whether to leave these matters to the British police or if there are matters to be investigated separately in this jurisdiction. If the Deputy has information about News International or any media outlet in this State infiltrating the telecommunications systems, e-mail or telephone, of any individual in this State I ask her to furnish it to me and I will furnish it to the Garda and request that it consider the matter with a view to its investigation.”

Daly: “I have no problem in doing that but we did furnish information to the Minister about Travellers going on the PULSE system over six weeks ago and have not received a reply from him. I will furnish this information. It is not my understanding that no complaint has been made. Very serious information has been given to the relevant authorities. It is without dispute in my mind. The Minister is deliberately confusing matters because we are saying without fear of contradiction this individual, who is before the courts in Britain, was a well-known figure in media circles in Dublin. He was known to the Garda special branch and connected with senior politicians and alleged security journalists. He had a string of informants who were also used by the Garda. It is relevant to ask for an examination of News International’s database here, including its payments records, for details of who was paid and who was hacked, and to establish the nature of the relationship between News International and its informants. There is a crossover with Garda informants and it is relevant to ask whether or how the Garda was involved in this. I am delighted that the Minister wants the information because he will get it, although I am surprised he asked because I think his Department already has the information.”

Shatter: “The Deputy is addicted to conspiracy theories. I have a particular view of the world, which is that if an illegality takes place of a criminal nature, it should be investigated by An Garda Síochána if the illegality is clearly a criminal offence in this jurisdiction. I have a simple view of the world. I do not know why the Deputy thinks my view is more complex than that.”