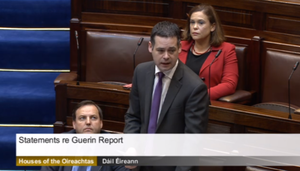 Mick Wallace now raising drugs allegations made by Garda Jack Doyle, who was the subject of an #rtept in 2001: http://t.co/KiYKVRtU73 #dail

Mick says one of the Gardaí involved in Jack Doyle’s case is a current assistant commissioner, and may even be the next commissioner #dail

Pearse Doherty: “More than a month ago I was contacted by a serving member of An Garda Síochána who relayed to me very disturbing allegations in regard to Garda practices in the Westmeath division but not exclusive to that division. I subsequently met with this garda and have had a number of telephone conversations with him since. On the day that the former Minister for Justice and Equality, Deputy Alan Shatter, resigned, that garda called me and told me that as a result of that resignation he now had more faith in the confidential recipient process and was going to arrange a meeting. That meeting took place today. Garda Keith Harrison claims that as a result of arresting a member of the drugs unit in Athlone for drunk driving, that Garda management maliciously set out targeting him while the arrested garda was afforded protection by Garda management. He claims that a managerial review of his high work returns and practices was instigated and persons who had past interactions with him in the execution of his duties were invited by the Garda to make complaints against him. He claims that during this period from September 2009 until March 2011, he was office-bound while the garda he arrested, who had been found with a high concentration of alcohol, was still driving official vehicles and carrying an official firearm. Garda Harrison makes serious claims about how the drunk driving case was struck out of court on dubious rulings and how evidence relating to the case was stolen by a member of the Garda. He also claims that a member of the Garda of officer rank stationed in the Westmeath division prevented successful prosecution of individuals in a number of cases.

“On Monday, I met with Garda Harrison again. At that meeting there was also Garda Nicky Kehoe, who is another serving Garda whistleblower, and who has made serious claims in regard to the connection of a major heroin dealer in the midlands and a senior member of the drugs unit. Both those serving gardaí at that meeting were joined by former garda and prominent whistleblower, John Wilson, who is advising both men. I also invited our justice spokesperson, Deputy Pádraig Mac Lochlainn, to attend which he did. At that meeting copies of sworn affidavits were given to me from both gardaí. Garda Harrison claims that he had suspicions about a member of the Garda who was working within the drugs unit who may have been knowingly allowing the sale and supply of drugs within the Athlone district and that he had raised this with management, but he claims that it fell on deaf ears. At that meeting I was also presented with a written record of a meeting between Garda Nicky Kehoe and a civilian who has come forward in recent days who corroborates the claims that have been made by Garda Kehoe in regard to heroin dealing and a member of the Garda.”

“Garda Harrison – who in 2007 was invited to Áras an Uachtaráin to receive from President McAleese his award for bravery for his second life-saving incident – in his own words sums up the fear of those who have come forward and those who are thinking of coming forward. In his sworn affidavit he said:

I was once a well-respected, ambitious and unblemished member of An Garda Síochána. Through systematic and relentless bullying and intimidation and unmerited scrutiny, I have, in my view, been totally undermined and destroyed. My good name and that of my family has also been tarnished and I now feel I have no option but to take this action. I feel I could not address this prior to now as who was I to turn and have faith in them to do the right thing? Who would believe me over Garda management? Would I make an unbearable situation worse for myself, by turning on the wolves that preyed on me? Never in my life have I felt so alone, tortured and disappointed. I have huge concerns about my future in An Garda Síochána and how much more is going to be thrown my way.

“The Guerin report, from our point of view, is not anything new because we heard most of these stories back in 2012 and raised some of them in this Chamber and at a press conference in December 2012 but nobody really wanted to know. Garda Sergeant Maurice McCabe had outlined how practices, procedures and cover up was the order of the day and nobody seemed to want to face up to the truth about that. It is good that Mr. Guerin has called a spade a spade because it helps to move matters forward in a positive way.”

“Since then our offices have been snowed under with stories and reports from different people and I do not know how it will all be dealt with. There are hundreds of them and they are very sad to listen to. I do not know how this should be handled but something will have to be done. One such story comes from a former garda called Jack Doyle. His story gained some attention around 2000. He revealed some serious drug involvement by gardaí in the Cork area and at the time the Garda authorities confirmed that undercover gardaí had been involved in the importation of illegal drugs into the State in what they described as controlled operations. However, a spokesman said that these operations were necessary in order to bring the leaders of criminal drug gangs to justice. Garda management rejected calls for an inquiry into claims made by Jack Doyle, saying nothing inappropriate had occurred.”

“We got a 27-page report from Jack Doyle into the background to what went on. I will read less than a page of it. He was speaking with one of the drug runners with whom he had become acquainted:

He recounted to me how they had many opportunities to arrest the boss of the criminal gang but failed to do so. When asked why, he replied, “They have a senior garda in their pocket.” He then recounted an incident in Rosslare when he was returning with a shipment of drugs. A customs officer stopped him and was about to search his jeep when two plain-clothes gardaí commandeered the jeep and drove out of the terminal at speed, being pursued by customs officers. A high-speed chase ensued and the gardaí lost their pursuers. As a result of this incident he said he would never personally bring drugs in again.

He then proceeded to tell me about the many runs he had done, bringing in cocaine, ecstasy, cannabis and firearms. Massive amounts of drugs were coming in and quantities were allowed to get into the hands of the criminal gang. He told me how he was being well looked after financially by both the criminal gang and the gardaí.

“He then went on to tell me where he had left a handgun in a wooden area in Cork. He contacted a particular detective sergeant and told him of the location, and drawing a map in the area pinpointed it. On finding the location, two gardaí threw in a number of firearms to beef up the find. He explained that the press reported it as a subversive arms find. When I asked him why they would do this, he replied, “To further their careers in the force.”

“Their careers have progressed and one of them is now an assistant commissioner. He was appointed by the former Minister, Deputy Shatter, and this same individual was involved in the Boylan case which entails a very similar story to Jack Doyle’s. Jack Doyle’s career did not progress. He turned up at his place of work one day and was told, “Jack, you’re not coming in here. You’d better go home. You’re finished, Jack. But, listen, you’ll be grand; we’ll look after your pension.” He was forcibly retired. That one of the gardaí involved is now an assistant commissioner – he could actually be the next Commissioner – emphasises how important it is that the new Commissioner should come from outside the State with a new hierarchy built around him or her as otherwise problems will not go away.”