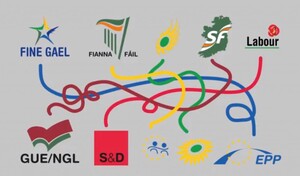 Apart from filling in expenses.

“I have been following the EU Elections since September of last year as this is the first election since the Lisbon treaty and things have changed slightly since then and I find EU politics fascinating.
However I have become annoyed since many Irish MEP candidates have avoided or not commented on major EU issues and focus mostly on Irish issues, even though they will be voting on pan-EU legislation. I was tired of candidates telling us they were going to get Ireland more jobs (as if any party stands for less jobs). So I made two videos explaining the EU elections in 2014, the first video (above) briefly explains the EU parliament and Ireland’s relationship with it and the second video found here (below) explains six big EU issues at the moment and where the parties stand on them.
I thought your readers may find them interesting and hopefully future Irish MEP candidates could one day discuss their campaign more like their mainland European colleagues…”

Mná Mná Do Doo Be Do Do