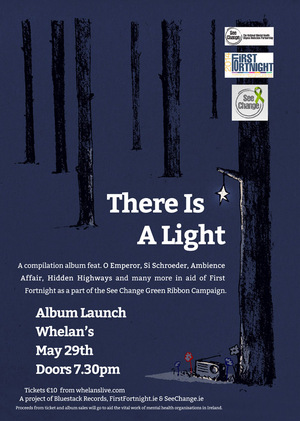 “We’re launching this awesome album on Thursday in Whelan’s [Camden Street, Dublin] in aid of First Fortnight. It’s called There is a Light and it features TWENTY Irish artists – including Ambience Affair, O Emperor and The Casanova Wave. The aim is simple: to raise awareness of mental health issues and raise funds for mental health charity First Fortnight. Indeed, all proceeds from the album (€10) & tickets (€10) are going to First Fortnight. The artists have given their music to the project for free. The launch gig features performances by Ambience Affair, Biggles Flys Again, Hidden Highways, Owensie & Dylan Tighe. Tickets are only €10 – for 5 acts (and all for a good cause). All the details are here: Thank you.

‘There Is A Light’ the album can be purchased here .