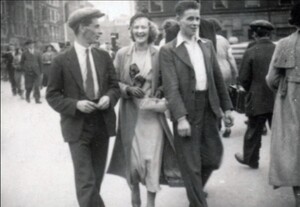 Street strolling in Dublin in the 1930s.

“1930s Dublin in Motion” as part of the Man on Bridge photo-collection project [gathering the photos of Arthur Fields, a street photographer who captured passersby on Dublin’s O’Connell Bridge from the 1930s to the 1980s.] The images were taken on film stock which resulted in a burst of three images and provide the movement.”