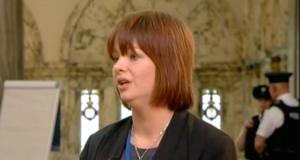 The first TUV councillor to be elected to Belfast City Council has apologised for sectarian comments she made about Catholics on Facebook.

However, Jolene Bunting (21) said she does not regret their content.

“I wrote them in the wrong. I’ve matured since then and I realise now that ranting on Facebook isn’t going to change anything. The council chamber is where I will be voicing my concerns,” she said.

“I do want to apologise for the innocent people in the Court ward who I offended with by using the word Catholic when I meant republicans,” she said.

“At the time I was young and not a member of the TUV and I know that since then I have matured in my knowledge and understanding.”

Fenian bastards not Catholic bastards then.