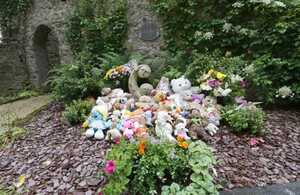 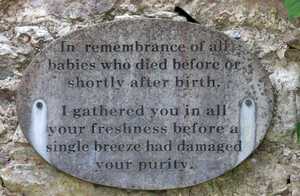 In the grounds of Bessborough House,  Blackrock, Co Cork today.

“The ‘Little Angels’ memorial plot in the grounds of Bessborough House. The items were previously tied to the railings outside the House during the weekend. The memorial plot lies within a graveyard that the Sacred Heart Nuns, who bought the House in 1922, used to bury their Sisters’. The Centre is still officially owned by the Sacred Heart Nuns though they have apparently no involvement in the running of the services.” 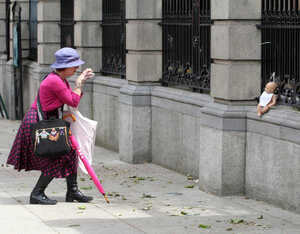 Mary Ryan from Malahide (and a mother and child home protest) Leinster House, Dublin this afternoon. Mary was protesting under the banners ‘Women Who Dared’ and Feminist Open Forum outside Leinster House in Dublin today asking ‘politicians to “Serve the people and not themselves ‘ as well as commemorating the English Suffragette Emily Wilding Davidson who died in her protest to give women the vote in 1913…”.