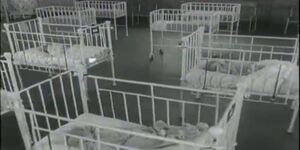 RTÉ has uploaded the Prime Time report on the export of Irish children in Mother and Baby homes to adoptive parents in America which was first broadcast in 1996.

She had this to say:

“If a girl got pregnant out of wedlock, this was another mouth to feed. It was also the thinking of society that unmarried girls shouldn’t get pregnant and they were rejected by their parents, by society, by the father who was responsible and we were here offering a service.”

“We did the best we could. Where would they go? Would it be better to be reared in an institution in Ireland or to be placed in loving families in the States? Now like all human institutions there were failures but from what we gather from children coming back looking for their origins they seemed to have done very well. The couple made the declaration to say that this child, in some of the States it calls ‘this alien’ would not be a burden on the American State and the couple swear that they will educate the child. There is a strong emphasis on the Catholic ethos and that the child will be sent to a Catholic school, to a Catholic university if it has the ability and there are a number of statements of income.”

In response to the accusation of babies being sold:

“Well it was a serious allegation to be made and we did check it out. We went through all the files. There is no evidence of money being passed. In the letters coming back there are mentions of small donations, “I’m enclosing a small donation for your society or for your organisation”. To my knowledge there was no fees involved and we have checked with anybody who is now, who is still alive and was involved with it.”

Blame It The On The Graphics Department