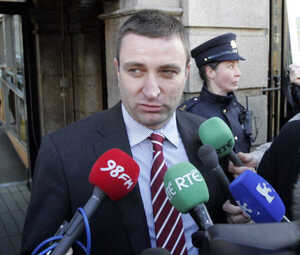 Or meddling with the ‘scales’ of JUSTICE?

“I fully understand and respect the absolute independence of any sentencing judge in making their decision based on the facts put before them during any trial [Hugo Porter, of Castleconnell in Co Limerick, pleaded guilty to possession of cannabis said to be worth “almost €18,000″ in a field in Limerick in June 2011.].
“If my actions suggest anything other than total respect for judicial independence that is a source of genuine regret”.
[Mr Collins] said he wrote the letter outlining the exceptional circumstances of the family as the mother of the man’s four children had died earlier this year.
He continued: “I truly believed that the Judge should be made aware of these tragic circumstances so that they could be taken into consideration when sentencing.
“My decision was based solely on compassion and concern for the four children.”

No Foal, No Fee