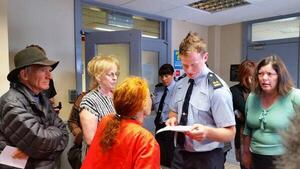 Margaretta D’Arcy received a two-week prison sentence on June 24 at Ennis District Court. Judge Patrick Durcan offered to suspend it on the condition she signed a bond stating she would not enter restricted areas of Shannon Airport.

As she has refused to sign this bond, she was sent back to Limerick Prison this morning for two weeks, after she presented herself at Mill Street Garda Station in Galway.

Ms D’Arcy, who is 80 and suffers from cancer, is planning to refuse food during her time in jail.

Ms D’Arcy served nine and a half weeks of a three-month sentence earlier this year after refusing to sign a bond agreeing not to enter the unauthorised zones at Shannon Airport on foot of being arrested at the airport in October 2012. 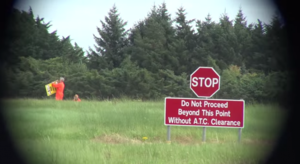 The protest carried out by Ms D’Arcy and her fellow protestor Niall Farrell on September 1, 2013 – the incident for which she is going to jail today.

Meanwhile, At The Department Of Justice