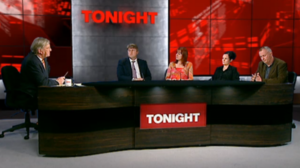 A short clip of Sir Nigel Rodley’s final comments at the UN Human Rights Committee in Geneva, Switzerland yesterday was played during the show, specifically this comment:

“The Magdalene Laundries, the Mother and Baby Homes, the child abuse, the symphysiotomy – it’s quite a collection and it’s a collection that has carried on [for a] period that it’s hard to imagine any state party tolerating. And I guess I can’t prevent myself from observing that [they] are not disconnected from the institutional belief system that has predominated in the state party.”

Clare Daly: “I don’t think it was simple at all. I think he was quite clear, I think his contribution was very much a solid defence of human rights and I think it was a vindication of a huge number of campaigning Irish groups, particularly women’s groups in some ways, to feel what they’ve been saying, maybe crying in the wilderness for years, has actually been vindicated now because on the whole symphysiotomy issue which was the first time that group ended up in front of the UN. I mean the committee were clearly horrified at what had gone on. These women had been butchered in their prime. He made the point that the UN had serious concerns about the fact that the redress scheme, that the government has put in place, is not compatible with our human rights legislation which I think is a hugely important step, because these elderly ladies have been trying to make that point here. When somebody externally makes that point which supports them, it actually shores up what they’ve been saying in an important way.”

McGurk: “Sure, but did it not need context, to understand where all of this came from? I mean it’s a very complicated…”

Daly: “It’s not that complicated really.”

McGurk: “Well explain what the medical profession were doing and where that came from.”

Daly: “Well this is a very simple issue of gross medical negligence, which is a point that the Irish State seemed to have not taken on board because it was never medically acceptable in the period in which these were…”

McGurk: “But where did it come from Clare? Widespread practice…”

Daly: “It came from, I suppose the belief is, a Catholic ideology existing in some of the private hospitals which felt that if you were a woman of child-bearing years well then your Catholic duty was to procreate as much as possible. And if your body, if you like, didn’t allow you, because of your shape or whatever, Caesarian sections obviously limit the amount of pregnancies you could have. So they chose, instead, to carry out this butchery of literally, and you know, the testimony is horrific but carving people up with saws in some instances. Instead to facilitate them childbearing, but it led to a lifelong disability, incontinence, lack of interest in sex, and huge difficulties in all of the years. And the idea that that would not be acknowledged is wrong which it hasn’t been by the Irish State. It’s just appalling to these women and instead we have this shabby little redress scheme with a paltry amount of compensation and that the women have to forfeit all of their legal rights before they can even access it. It’s completely wrong. This is gross medical negligence and should be compensated as such.”

McGurk: “Michael, has it been accepted as wrong?”

Michael McNamara: “By the State?”

McNamara: “Well, I mean there is an ex-gratia compensation scheme but one of the issues with the State, I understand, is criticised for, and I didn’t see the entirety of the hearing, was the fact that there wasn’t a proper process of finding fault, in effect, and apportioning blame. But I suppose there has been a compensation scheme and I suppose, to many women, that will bring closure, but obviously the human rights committee…”

Daly: “The women have met, hundreds of them met last weekend, and it’s been unanimously rejected. I mean if you compare for example the Lourdes Hospital redress scheme where the women’s wombs were taken, there was €45million allocated to that scheme. The amount of payment was substantially more and it was deemed to be medical negligence and in this scheme the courts have awarded between €300,000 and €600,000 and yet this scheme is saying between €50,000  and €150,000 for permanent  lifelong disabilities and pain, that’s no compensation. But I think what’s more affront for the women is that nowhere has the State recognised and this is what the UN validated today, if you like, that it was a violation of human rights and  that it shouldn’t have happened, it was medically unwarranted, it should not have happened.”

McGurk: “Do you see Deirdre this as having considerable impact?”

McGurk: “It’s different to something before, in many ways?”

Duffy: “Well, I think it can have as much impact as we want it to have, as a country, as a society, as a Cabinet, a Government that’s going to move on now. And Tom, you asked a series of questions about what happened back in the day, why did this occur, and that actually is what Sir Rodley was getting at. Michael [McNamara] used the term blame but actually the word that he [Rodley] used was accountability. So what he said was that even though this Government has put in place a redress scheme, they’ve allocated money, they’re focusing only on the pecuniary impact of this or the pecuniary redress. So what he’s saying is that you need to look further, you need to look at truth finding and accountability mechanisms because, you raised the questions yourself, it’s not clear to everyone within Ireland, why this happened..and how this happened.”

McGurk: “Yes, where did this come from?”

Duffy: “Now there have been reports, a number of independent reports from survivors and also  State-sponsored reports which survivors claim were not independent and not thorough and would find numerous faults with. But I think what’s important for us right now is what Sir Rodley said around the collection of activities that I suppose produce a, or refer to our past, past abuses. So issues like the Magdalenes, the mother and baby homes,  the symphysiotomy and the child abuse, these are relics of our past that we need to deal with and  sweeping them under the carpet and allocating some form of  monetary compensation to women – because it’s all women – is not going to be good enough. It does not meet the…”

McGurk: “So ideally, how should the State deal with this? Spell it out then?”

Duffy: “Well it should set up independent inquiries. It’s something that the ICCL, the Survivors of Symphysiotomy and other groups, Justice for Magdalenes,  have been calling for for a number of years. We know we’re going to get an inquiry into the mother and baby homes, under the Commission of Investigations Act 2004, so why not have an inquiry into this collective, as Sir Rodley called it, series of abuses?”

15 thoughts on “What Ties Them Together”