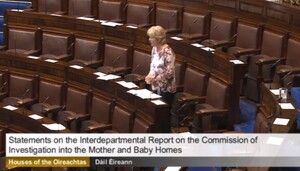 In a powerful testimony during a debate on the Mother and Baby home scandal in the dail this afternoon Labour TD Ann Ferris recounts the first meeting with her sister.

“Minister, two weeks ago I met my younger sister for tea across the road in the Merrion Hotel. It was a very unusual day but not because neither of us had taken the time to have tea in the very posh Merrion Hotel, it was unusual because it was the first time we had shared a pot of tea.

Before that day two weeks ago I had never set eyes on my sister. Each of us was adopted from a different mother and baby home, into two different families, eventually ending up in different countries. Sitting together we looked like sisters but we didn’t talk like sisters.

Where other sisters in our age group have shared experiences and family history we have just had a very long, long gap in our lives. I never played childhood games with the sister. I have never fought with her over toys. We never skipped together or climbed trees. She wasn’t handed down my old clothes. We didn’t go to school together. She doesn’t know my children. We look very alike. But so far that is the only aspect of our lives that we share.

And what of our shared mother? I know from the documented experiences of many women of her era that women who bore more than one baby in a mother and baby home were frequently obliged to serve time in a Magdalene laundry and perhaps our mother managed to avoid such a sentence by not choosing the same home twice for her confinements. The evidence is however that most women in her circumstances would have paid their penance by toiling for years in one of Irelands notorious laundries.

Research carried out by the the Magdalene names project published last week shows that in the year that I was born more than 60% of the Magdalene women, that’s six out of every 10 women, Minister, whose name was recorded as inmates in two Dublin laundries were also recorded on headstones in Magdalene grave plots. These women did not leave the laundries alive

My sister and I feel lucky. We were both adopted as babies into loving families. But not everyone born in a mother and baby home was so lucky. The morning after I met my younger sister for the first time I had the pleasure of meeting three beautiful intelligent women who had spent their entire childhood and teenage years into adulthood in religious run institutions. They were born in the 1960s.

Their fathers were doctors and black. Their mothers were Irish and white. These mixed race Irish children were not considered by the Church or State to be appropriate candidates for adoption.

Their stories of racial discrimination, physical abuse and mental abuse are truly shocking and when I hear their stories and other stories from survivors and victims of abuse in Catholic institutions and Protestant run institutions like the Westbank children’s home in my own constituency of Greystones I know that I have been lucky.

I know that I have been lucky in another area. As a member of this House I have the freedom within this debate to add my story to the public record. Other people whose intention it was to be in this room today for the debate and I know lots of people who have scheduled to come in at 4, other people with similar backgrounds to mine who would have been barricaded behind the glass partition of the visitors’ gallery.

These people have not been not been offered the opportunity to have their stories heard. Their stories and what the future of Ireland can learn from them is the reason why this Commission is so important.

Stories like my story and my sister’s story demonstrate why this needs to be a broad and all embracing enquiry. The mother and baby homes, the adoption process, the Magdalene laundries, the private nursing homes, the county homes, the Church hierarchies, the religious organisations and the State are all part of a very large jigsaw puzzle that must be looked at in its entirety. Until this is done openly, honestly and comprehensively the gaps in the lives of families all over the country cannot begin to be filled.”