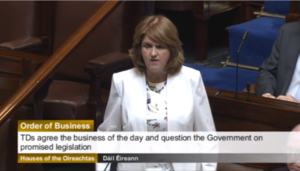 Sinn Féin proposing that the #Dáil sits tomorrow, instead of going into recess, to discuss Israel’s assault on #Gaza . #GazaUnderAttack

Tanaiste will not allow Gaza debate in #Dail and instead says detailed discussion can take place in a committee — Juno McEnroe (@Junomaco) July 17, 2014

#Dáil stands for 1 minute in solidarity with people of #Gaza & for peace the Middle East on the request of Sinn Féin. pic.twitter.com/O8HyJIkDvZ