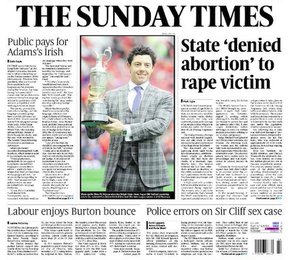 A woman who became pregnant as a result of rape believes the state denied her access to an abortion for months, until the foetus became viable. Earlier this month, the baby was delivered prematurely through a Caesarean section, which was authorised under the Protection of Life During Pregnancy Act.

The young woman, a foreign national with limited English, was not able freely to travel abroad for an abortion because of her legal status in Ireland. She discovered she was expecting about eight weeks into the pregnancy, and immediately sought an abortion because she had been the victim of a traumatic rape.

Months later, the woman believed she had been effectively refused an abortion, or the ability to travel abroad for such a procedure, by the state. She then went on a hunger and liquid strike.

That’ll Be The Dei

110 thoughts on “Without Consent”