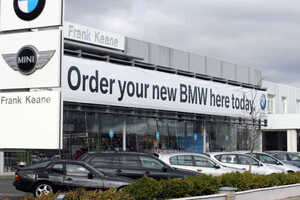 Up to 120 BMW cars stolen in a sophisticated cross-border key cloning racket were to be broken up and shipped to Latvia, the High Court in Belfast has heard. An eastern European crime gang is suspected to be behind the theft of the cars from Dublin. They then moved them to garages in Northern Ireland, prosecutors said.

A prosecuting lawyer said two co-accused are believed to have travelled from England to help transport the cars. “Police believe this gang are operating in different jurisdictions,” the lawyer said. “Approximately 120 BMWs were stolen from the greater Dublin area since September 2013.” The lawyer said: “Since the arrests, there have been no reported thefts of BMWs in the Dublin area. Prior to this, they were almost on a nightly basis.”

The Thong I Loved So Well