Philadelphia Rose Maria Walsh was last night crowned as the 2014 Rose of Tralee.

You may recognise her… 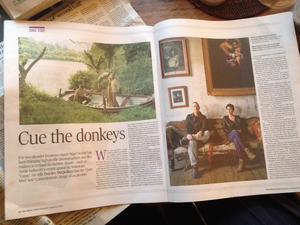 Maria appeared in the Irish Times Weekend Magazine in January this year where Deirdre McQuillan wrote about the locations expert Nigel Swann:

Recently, he has taken on a co-producer, Maria Walsh, an Irish American who was born in Boston but returned to Shrule, Co Mayo, with her Irish parents when she was seven. After graduating in journalism from Griffith College, Walsh moved to New York and worked as a producer with Anthropologie, where she met and worked with Swann.

It features a photo of Mr Swann and Ms Walsh in a house in Henrietta St, Dublin taken by photographer Perry Ogden. In the accompanying blog it says:

Here is a photograph that Perry took of Nigel with Maria Walsh, who we had worked with at Anthropologie and has moved home to Ireland and is now working with Nigel. A great team! So now we have a man and a woman ( ha ha ) for all our production in Ireland, and they also handle production and locations all over Europe and are amazing to work with, so check them out!

No mention of the above when the Philadelphia Rose was interviewed by Daithí Ó Sé.

This Just In: Daithi Has A Girlfriend

The Sash My Mother Wore

44 thoughts on “That Which We Call A Rose”