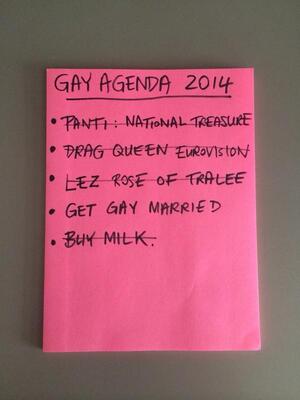 2014 is working out well. #gayagenda pic.twitter.com/YUiuaRXHyK

I really don’t think the female voices we need most present in our media right now are two nights of the Rose of Tralee. Soz, Ireland.

I can usually find a level on which to enjoy the Rose of Tralee. This year it’s just making me really really angry. — Louise McSharry (@louisemcsharry) August 18, 2014

This Just In: Daithi Has A Girlfriend

The Sash My Mother Wore

39 thoughts on “What A Difference A Gay Makes”