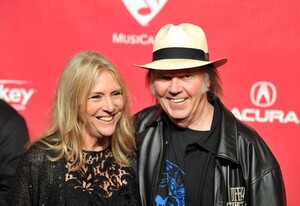 Neil Young has filed for divorce from Pegi Young, his wife of 36 years. A petition for dissolution of marriage was filed by Young in their hometown of San Mateo, California, on July 29th. A hearing is scheduled for December 12th. A rep for Neil Young had no comment.

Neil first met Pegi when she was working as a waitress at a diner near his California ranch, a story he tells in the 1992 song “Unknown Legend.” They were both slated to play Farm Aid in Raleigh, North Carolina, on September 13th, though Pegi’s name was recently removed from the lineup.

23 thoughts on “Only Love Can Break Your Heart”