Neil Young posted this message (top) on his archives website.

The duet he sung with Bob Dylan at Nowlan Park [Kilkenny] last Sunday was a tribute to his late manager Elliot Roberts who died earlier this month.

The song ‘Will The Circle Be Unbroken?‘ is an old American spiritual popularised by The Carter Family and was recorded by Dylan in 1961.

Monday: Nowlan In The Wind Bob'n'Neil together last night, but keep an eye on the security guy at the front who's telling everyone to stop taking photos and filming. How did he miss the guy who was filming this?https://t.co/RY7kByXpJw

Bob Dylan & Neil Young were playing last night and the Das of Ireland descended on Kilkenny. They lost the run of themselves.

I was in a pub after the gig and at about 1 am I went to the jacks to find a man in his late 50s urinating in the sink while smoking a joint….

BOB DYLAN and NEIL YOUNG
To perform at Nowlan Park, Kilkenny
In Their Only Appearance in Ireland
Sunday 14 July 2019

★ Tickets go on sale this Monday at 9am! ★ pic.twitter.com/ExVuaAxkc6

Dylan and his band and Young with Promise of the Real will play Kilkenny’s Nowlan Park (top) on Sunday, July 14, 2019.

Tickets go on sale next Monday, December 17, at 9:00am from outlets nationwide.

Neil Young has filed for divorce from Pegi Young, his wife of 36 years. A petition for dissolution of marriage was filed by Young in their hometown of San Mateo, California, on July 29th. A hearing is scheduled for December 12th. A rep for Neil Young had no comment.

Neil first met Pegi when she was working as a waitress at a diner near his California ranch, a story he tells in the 1992 song “Unknown Legend.” They were both slated to play Farm Aid in Raleigh, North Carolina, on September 13th, though Pegi’s name was recently removed from the lineup. 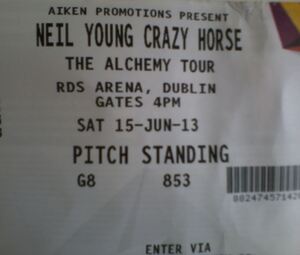 Were you at the RDS on Saturday night?

what do you like about foster the people? #askneil btw, bono said he likes them, too… it is surprising two super stars like them..

@akemi99 who is Bono? #askneil