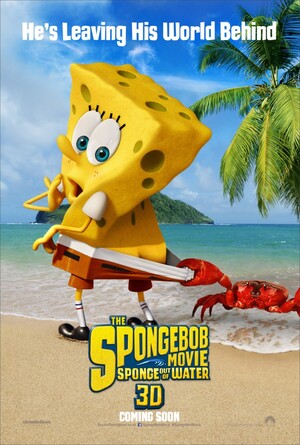 1. It’s SpongeBob Squarepants in glorious 3D. SpongeBob and the gang leave the water to save the world from an evil pirate with a magic book.

2. This time they have the second greatest rock musician/actor in the world in Slash.

4. Ten years have passed since we first became men.

5. They pushed the movie release forward a week so not to coincide with the release of 50 Shades of Grey (2015). There is only so much matinee space to go around.

6. The movie poster is a nod to the oft-parodied Coppertone Sunscreen ad from the 50s.

7. Broadsheet Prognosis: we are all goofy goobers.

8 thoughts on “Broadsheet Trailer Park: The SpongeBob Movie – Sponge Out Of Water”