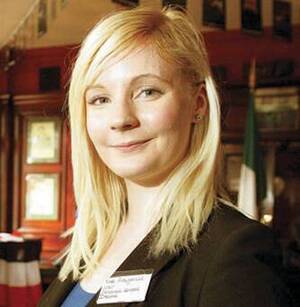 “The Department of Justice is to re-examine the Garda investigation into the 2011 death of PR executive Kate Fitzgerald, after repeated claims from her family the original case was flawed.

In a coroner’s case last year, the death of the 25-year-old PR executive and former chair of the US Democratic Party Abroad in Ireland was ruled a suicide.

However, after subsequent questions from her family, it emerged a number of standard procedures used to rule out other potential causes of death were not followed.

These include a failure to take photographs of the scene before clothing and other belongings were removed; no examination of the cupboard in which Ms Fitzgerald is said to have killed herself; and the absence of a ligature allegedly used during her death.

Ms Fitzgerald’s family were also provided with an “unsolicited” copy of the initial coroner’s report into her death, which noted a bone in her neck that would normally be left untouched in a hanging but is often broken in a manual strangulation case, was fractured.

A Garda Ombudsman review of the case was concluded last year. However, while accepting there were flaws in how the death was examined, the review said it is unclear what impact if any this had on the case as “potential evidence” was not “properly maintained” and is now “irretrievably” lost.

When You Ask A Question