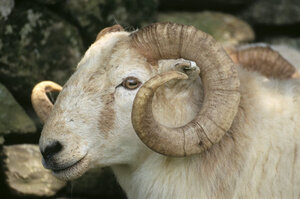 Faarmers protesting outside Enda Kenny’s constituency office [Castlebar, Co Mayo] yesterday accused the Taoiseach’s staff of illegally detaining two mountain rams in his office.
The rams entered the office at approximately four o’clock during the protest. Farmers denied they deliberately let the animals into the office, claiming the rams ran in by themselves. The Mayo News understands that the rams were taken out the back door of the office just after 6pm and taken to a pound.