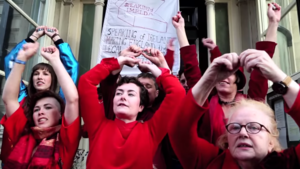 Abortion rights campaigners use rape alarms and the “format of the Catholic Rosary” to recall the treatment of women by the Irish State and the Catholic Church outside the London Irish Embassy.

Ann Lovett; the women who received symphysiotomies; Miss X from 1992; the women incarcerated in the Magdalene laundries; the women who gave birth in Mother and Baby Homes and who had their children taken from them, or sold into adoption to raise money for the Catholic church; Miss A, B, C, D; the 12 women a day who travel from Ireland to Britain for abortions; Savita Halappanavar; the women who risk 14 years in jail in Ireland for taking abortion pills; and raped asylum seeker Miss Y, who was denied an abortion and went on hunger strike before being made to have a Caesarean section.

The demonstration was co-organized by Speaking of I.M.E.L.D.A., London Irish Feminist Network, My Belly is Mine and Abortion Rights (UK).

7 thoughts on “The Silent Screams”