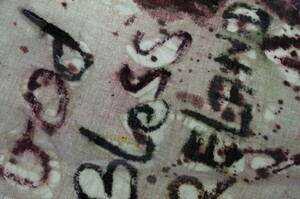 A section from a ‘prayer flag’ found in The Old Convent direct provision centre in Ballyhaunis, Co. Mayo, in 2010

Brian O’Connell continued his series on direct provision this morning, on RTÉ’s Today With Seán O’Rourke show. During his discussion with Mr O’Rourke, Mr O’Connell played another interview he had with a woman who has engaged in prostitution to supplement the €19.10 she gets from the State every week.

The interview started with the woman – whose name and place of residence was not reported – saying a girl approached her and told her how some Irish men would be “looking for black girls” and how “they offer you some money. I tried it once.”

Brian O’Connell: “Was it the case that a friend of yours referred that person to you?”

Woman: “She was with a man and most Irish men know, in the centres, I know I’ve met one who asked me ‘do you come from the centre up the hill?’ And I said, ‘yeah’. And he said, ‘well would you like come clean my house?’ And I said ‘yeah, that would be OK.’ And he came and met me next to the place and then he took me around some bushes and then he told me he just wanted to feel my body and paid me €10. Yeah.”

Brian O’Connell: “And how did you feel?”

Woman: “Worthless, worth €10, for someone to feel your body, that someone would just look at you and feel you’re worth €10, how shit would that be? When you do it, you don’t do it because you want to do it, because your body wants it. You do it to get a little bit of something. A little bit of money to help you. Not for yourself, for your son – maybe he needs to go to swimming classes, school trips are very expensive, yeah.”

O’Connell: “And these men that you’re meeting, are they married?”

Woman: “They are married, of course they’re married, cause when they call you in the evenings, they ask you not to call them.”

O’Connell: “Is it fair to say that you wouldn’t be doing this if you weren’t in the [direct provision] system?”

Woman: “I don’t think I’d be doing that because I envisioned a life of freedom, going to school, get a job, contribute to the economy. You know, everyone has dreams in life and you don’t dream of selling your body, you don’t do that.”

O’Connell: “Do the men call to the centre?”

Woman: “They call outside the centre.”

O’Connell: “So they don’t go inside the centre?”

O’Connell: “Do you think if asylum seekers, like yourself, were able to work, that it would have a huge impact on your lives?”

O’Connell: “Can you tell me a little bit about the rejection?”

Woman: “He was calling me names, n*gger, bitch, whore, and I didn’t like that. And then I told him I don’t like such names. He say, ‘oh, parasite, you sponge off the country’. He called me so many names, yeah.”

O’Connell: “When I was at the centre a couple of nights ago, I think I might have seen you leave.”

O’Connell: “Can you tell me where you were going?”

O’Connell: “And was there money involved?”

O’Connell: “Do you mind me asking how much?”

O’Connell: “It seems surprising to a lot of people that it took this long for women like yourself to tell your story and  the minister [for Justice, Frances Fitzgerald] that media reports could further stereotype you.”

Woman: “When someone comes out, they give you a voice to come out too because, before that, no one cared, no one really cares what we go through.”

26 thoughts on ““He Took Me Around Some Bushes””