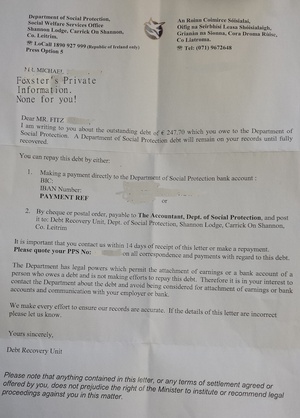 “I got this letter from the Dept of Social Protection last night seeking payment of an outstanding debt. After initial confusion it dawned on me that I had remained on the dole for a week into my job that I started back in 2007, for, you know, food.  A phone call to the Dept this morning confirmed that this was indeed the case and recent legislation passed means that many more can expect letters like this. It’s fair enough that I pay it back. It’s a little unfair that I’m charged for 2 weeks when they have me down for 8 days of overpayment. It’s also a little unfair that you’re to drop off the dole the day you start your job, in my case six weeks before I’d get my first payslip. Still, I always knew I was a big fish and in this small pond I would be caught eventually….”

Thanks Original Cynic (for header)

A Bit More Serious Than A Missed Interview