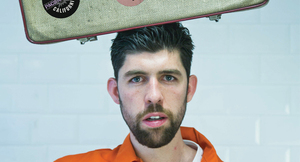 Pilgrim at there Smock Alley Theatre.

The boy can act.

It is not an easy thing to get other people to listen when you tell them stories about your travels. The minute you start on about ‘When I was in Berlin…’ someone is inevitably prompted to tell you that this reminds them of when they were in Berlin and they start telling you their far more interesting story about Berlin.
If you happen to be on a stage in a theatre, you stand a better chance of getting them to shut up and listen to your story, but only if they don’t fall asleep first.
And so I like to be prepared, when I get invited to see a monologue. Ideally, I like to have a flask of something strong and a comfy cushion.
There are some tricks that you can use, to hold your audience. You can use an abundance of graphic and unexpected sex. But this doesn’t always work.
‘Pilgrim’ is a one man show in which one man without the aid of props (apart from a small rucksack) attempts to hold an audience for eighty five minutes without an interval.
And it succeeds. In fact, it more than succeeds.
Both the actor and the play grab you by the earlobes and by the eyeballs and by myriad unseen other parts of you and hold you in a vice grip of such rapt attention that you forget where the flask is that you brought to relieve the boredom.
What makes it amazing is the story that he tells you is the sort of story that would in real life lose an audience pretty sharpish.
It is a story about a young Dublin man who has moved to America after inadvertently getting his girlfriend pregnant, and then gets caught up in the 9/11 situation when his flight to Dublin is re-routed to Newfoundland, where he is forced to wait four days because all civilian flights are grounded. If I hadn’t actually seen the play, I would have been instantly reminded of a time when my flight from Thailand was re-routed to Bangladesh during the gulf war, and I would have wanted to tell that story instead.
Pilgrim does use some tricks to hold your attention. And one of them is graphic sex, in unexpected circumstances. And the sex is graphic.
But it uses all kinds of other stuff, too. It uses comedy, it uses energy, it uses pathos, and it has an elegant and exceptionally self assured way with tone and timing. If you want to keep people interested you need to get them on side but you cant keep them there. You need to keep surprising them, they must never know where you are taking them.
Pilgrim uses every trick in the story telling book and when it runs out of tried and tested tricks, it re-writes the book. The writing by Philip Doherty is so flawless that it never occurs to you that the actor didn’t write it himself. There is no evidence of a director. Everything the actor does seems like something that has just occurred to him.
The actor is worthy of the use of expletives, such is the talent that he displays. I will not use them here, in this family broadsheet, but you can make up some of your own.
It may be important to say that the actor Rex Ryan is a son of the late Gerry Ryan, but then again it may not be important to say that. If you had known Gerry Ryan, you would be reminded of him. He has a level of energy and an engaging irreverence and unselfconsciousness that seems familiar. At times, he practically leaps off the stage and lands on your lap. He also has the balls to carry off a perfectly timed and carefully judged moment of impassioned soul searching and naked emotion without losing your respect and while being strong enough to not give a shit if he does lose you, which is a great recipe for keeping you.
As I said, it is not an easy thing to stand up there and tell a story about your travels, but this guy pulls it off. I do have one complaint. There is a scene in which he starts a strip-tease and doesn’t finish it. And what he does reveal is rather tasty. But then, you always have to keep them wanting more.

9 thoughts on “Pilgrim Vs The World”