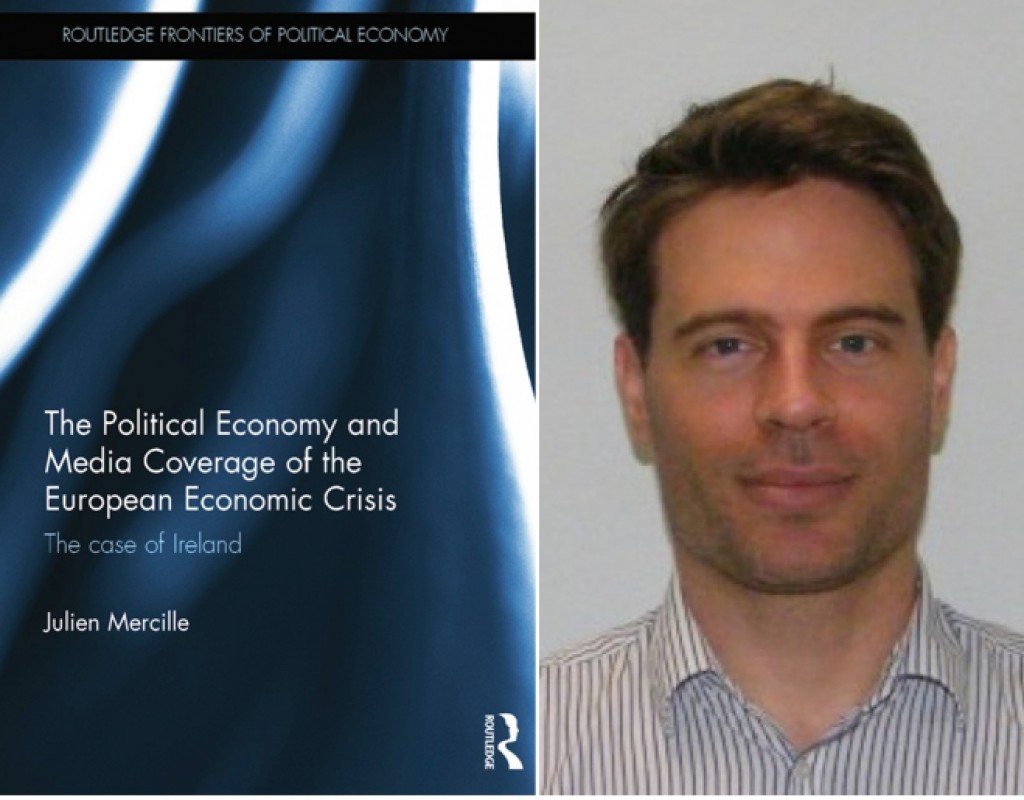 The Critical Media Review sat down with French Canadian buff boffin Dr Julien Mercille, of UCD, whose book on the media’s role and collusion in the boom and bust was published last week to much acclaim and some fury.

Julien, Why does the media fail us so?

Julien Mercille: “The media serves the interests of its owners and the corporate class of which they are part. They serve an ideological function in presenting government policy and interests in a positive light. All along the economic crisis, the media consistently endorsed and supported virtually all government policies (the major ones, at least), confining debate to details and losing sight of the big picture.”

Critical Media Review: “Do you think the severe concentration of media ownership in Ireland plays a role in this?”

Mercille: “Yes, to some extent. A lot of the media is owned by Independent News and Media, for example. But an issue that’s probably more important to me is the nature of media entities. As of now, they’re all corporate or state-owned with significant commercial interests (RTE), so even if you had more of those, it would be better, but not that much. What’s missing is a diverse media in the sense of more alternative, strong media outlets. That would provide significantly more diverse coverage, alternative viewpoints, etc.”

CMR: What about RTÉ, has the public media been any better at covering the crisis?

Mercille: “No, it’s the same thing. It’s owned by the government, so it’s no surprise that it reflects government views. For example, during the housing bubble years, RTÉ’s Prime Time show, the leading current affairs programme, ran about 700 shows. Only 1% of its shows addressed the housing bubble, let alone criticising it.”

CMR: “Do you see any room or agency for progressives working in the Irish media sphere?”

Mercille: “Yes, there are many actually, but there number will be limited as long as the structure of the media landscape remains as it is. Vincent Browne, Gene Kerrigan, Colette Browne, Fintan O’Toole and others give good progressive viewpoints.”

CMR: “If the media is so heavily biased towards neo-liberal economic policy can it play any progressive role in Irish society and democracy?”

Mercille: “It plays a role as it is now, but it could play a much more meaningful role if it was restructured along the lines mentioned above, i.e. by encouraging alternative media outlets that reflect to a greater extent the interests of the population as a whole.”

CMR: “Do new online media channels offer any hope for you?”

Mercille: “I don’t think online media improves or worsens the potential for better news, it’s just another medium. There are a lot of good websites and blogs obviously, but there are also a lot of mainstream news websites that actually dominate the internet.”

CMR: “What is your advice to political activists in terms of relating to the media?”

Mercille: “On one hand I’d say try to present your message in a way that’s “respectable” so as not to worsen an already difficult situation in reaching out to the media and getting covered. On the other hand I’d say that it’s not good to change your message and actions too much just so that the media will be more likely to give you coverage, it’s better to do what you think is best for whatever project you have, and not think too much about “convincing” the media to give you coverage, otherwise it can often lead to hitting walls and waste of time and going in the wrong direction. So a balance has to be struck and that depends on context and the specific case at hand.”

13 thoughts on “The Quality Of Mercille Is Not Strained”