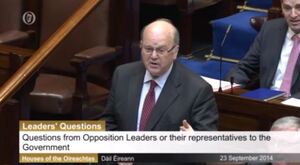 “I understand why you’re a little bit subdued today, I understand why you’re a little bit subdued today, because you’ve opened a political movement on the backs of misery and failure in the economy. But the country isn’t failing, the country is growing again and it’s growing very strongly. Now I’ve noticed, I‘ve noticed in this morning’s paper you’ve stated you have another red line issue. First you’re going to abolish property tax, now you’re going to abolish water charges and these are red line issues. Nobody is rushing to join you in government. Putting down a red line issue, it’s like an oul’ fellow walking up and down the boundaries of the Ballroom of Romance saying that he won’t dance with any of those women over there. Nobody wants, nobody wants to dance with him. Nobody wants to dance with him, that’s the position. So red lines, red lines, red lines, you’re joking me.”

Minister for Finance Michael Noonan drawing a wistful analogy for Deputy Pádraig Mac Lochlainn in the Dáil this afternoon.

Isn’t it well for them?

42 thoughts on “This Is No Dancing Matter”