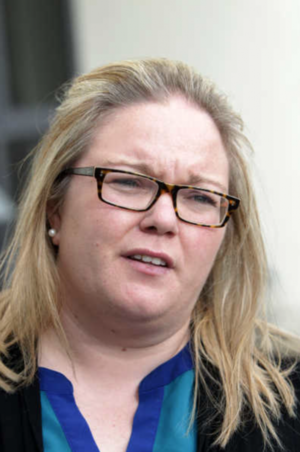 This morning it was reported that Fine Gael’s candidate for the upcoming Seanad by-election on October 10, John McNulty, of Donegal, was appointed to a state board – the Irish Museum of Modern Art – a week before his nomination.

Mr McNulty, who previously ran for election in the local elections for Fine Gael but failed to win a seat, was appointed by Fine Gael’s Heather Humphrey.s

Further to this, Labour TD Ciara Conway spoke to Jonathan Clinch for today’s News At One on RTÉ about the matter.

Ciara Conway: “I think for a government that has brought forward the legislation about having 30% female candidate in the next general election that it’s a missed opportunity for a woman to make her mark in national politics. I think that the fact that the seat was vacated by a very able politician in Deirdre Clune, you know, is a lost opportunity. If you look at how the Irish parliament and the Oireachtas rank, internationally, we rank, well up in the eighties, 86, in terms of female participation and, you know, all other things being equal, in terms of ability and capability, my preference would have been for another woman Senator to join the team. But it’s endemic, across the political spectrum, it’s the old boys’ club in action again. And it’s very disheartening for people who are engaged in politics because, you know, there are barriers there and gender is one of them. I do believe that a woman should be there and the fact that, you know, the seat had been vacated by a female senator, it is hugely significant, because it’s a loss, we’re down another woman. And I don’t even know what that will do to our rankings further – will that bring us further down the international ranking in terms of female representation.”

Jonathan Clinch: “Do you believe that the Taoiseach is committed to gender parity in politics or does this betray an absence of such commitment?”

Conway: “I think, you know, the question can be asked of all political leaders in relation to their…”

Clinch: “But we’re looking specifically at Enda Kenny in this regard.”

FG’s Seanad nominee given job on state board (Today FM)

Two members of FG Parl. party requested that Enda Kenny give an account to the party on how the IMMA/Seanad affair was handled. #rtenews