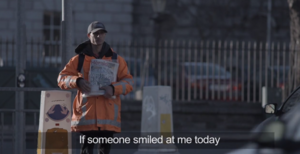 A trailer for Bloody Good Headline.

“Areaman Productions and Paul Quinn have made a short documentary about the men (mostly) who sell ‘The Herald’ in traffic around Dublin city. It will screen this Saturday at the IFI at 5pm as part of the Stranger Than Fiction Festival. Though filmed on the streets of the capital, there is no English spoken in the film: our subjects are variously from Poland, Venezuela, Brazil, Malaysia. It is not an easy job and is not very well paid. Our short film aims to give voice to these people who everybody sees but nobody ever hears from…”

8 thoughts on “Heralding The Sellers”