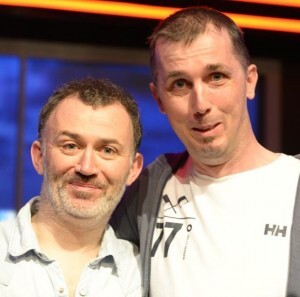 Tommy Tiernan’s improvised show in Stockholm, Sweden in March  will be a small part of Tommy: To Tell You The Truth a documentary showing on RTE1 at 9.35 tonight.

Sweden-based journalist Philip O’Connor was in the audience.

Surely he wasn’t going to improvise the whole show?

In parts it was gut-achingly hilarious, in others cringeworthy. His few hours in the city had given him enough to hit the easy targets early and often – how well-run the country seemed, how beautiful everyone was, and how the Irish stood out in comparison.
The crowd tried to go with him but those with bellies full of beer and a distinct lack of understanding of the live setting interrupted the flow repeatedly with heckles, particularly when Tiernan tried to take the tempo down before quickening again.
It was like the lions realizing that the ringmaster’s whip and chair were no match for their teeth, but this particular ringmaster had a few more potent barbs in his arsenal.
Tommy ploughed manfully on – 18 years of dealing with audience members who all think they are funnier than you gives you certain coping mechanisms, even without the safety net of a script – never once seeking the comfort of familiar material.

It was a masterful, powerful, almost sickeningly brave performance, both physically and verbally.
This was a performer dragging us to the very limits, forcing us to stare into the abyss and then pulling us back and changing course. Only a few were lost over the side.
Finally, he took the enthusiastic standing ovation of the crowd; some applauded the jokes made up on the spot, while others applauded his courage and resilience.
Some clapped in relief that it was over, while others knew that they had seen something very, very special, even if they couldn’t put their finger on what it was….”

“Backs Aching For The Lash”

Tommy Can You Hear Me?

7 thoughts on “Tiger Of Sweden”