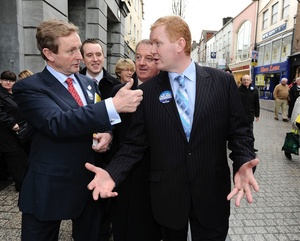 Enda Kenny with Paudie Coffey during the 2011 General Election campaign

Paudie Coffey: “I think he has done the right thing to avoid any confusion because I think because I think the integrity of Irish Water and the directorships and that must be kept intact. He is now a civilian again and he is remaining as my driver and that’s the way it is, so I’d like to leave it at that.”

Newstalk: “Did you know he was a director of Irish Water?”

Coffey: “Yes I did, I did, so we’ll leave it at that… No I didn’t understand exactly the conflict of interest.”

Junior Environment Minister Paudie Coffey to Newstalk on the resignation of his chauffeur Hilary Quinlan as a director of Irish Water.