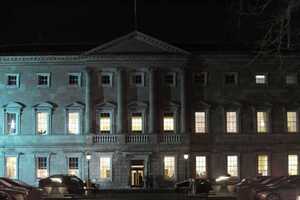 Fiach Kelly, of The Irish Times, joined them to report on tonight’s Fine Gael parliamentary party meeting dominated by cronyism..

Dearbhail McDonald: “What’s catching up with Enda Kenny and his party at the moment is what caught out other bodies, such as the Catholic church, it’s not the…for example, in the Catholic church, it wasn’t the fact of clerical sex abuse, it was the cover-up and I think what the public are very very disenchanted and angry at is the manner in which it is being held, being insulted, you know. ‘And I’m sorry if you thought this was something that you imagined it to be’ or whatever that mangled phrase by the Taoiseach was.”

Shane Ross: “In the Dáil today, there wasn’t a single Labour minister there, or yesterday when Enda Kenny was taking questions on this cronyism. They deserted the Dáil, they were deliberately absent, they didn’t want to be associated with it and they did nothing about it. They are as guilty as Fine Gael, not just by innuendo, but because they’re at it themselves, they’re at it themselves. Because they’ve got…look at the board of An Post and see how many Labour people who are on there who are ex-apparatchiks, they’re at exactly the same game themselves and they’ve been caught. I think, I think, and I may be wrong, the proportion is it’s 2:1, Fine Gael get two, Labour get one and that’s the end of the story.”

Fiach Kelly: “The [Arts] minister herself [Heather Humphreys] made a contribution to the meeting. Again, she didn’t really go further on what she said in the past few days. She told TDs that when it came to Mr McNulty’s appointment to the Irish Museum of Modern Art, she did it entirely on his merits and she was described as having made an address, that she could have read from a script, and didn’t really say much that we didn’t know already.”

22 thoughts on “No More Crony Nights”