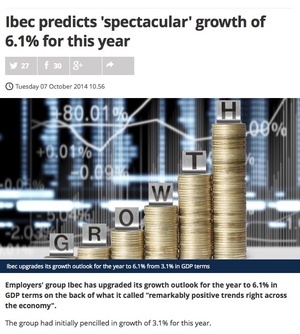 Growth of 6.1 per cent would make Ireland the fastest growing economy in Europe this year “paving the way for income tax cuts in next week’s Budget”.

“In its flagship World Economic Outlook report, the Washington-based body cut its expectations for global growth to 3.3 percent this year and 3.8 percent next year. The IMF in July had expected economic growth of 3.4 percent in 2014 and 4 percent in 2015. The IMF has now cut its current-year growth forecasts nine out of 12 times in the last three years as it consistently overestimated how quickly richer countries would be able to pull free from high debt and unemployment in the wake of the global financial crisis in 2007-2009″.