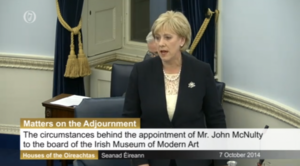 Arts Minister Heather Humphries in the Seanad this evening

Arts Minister Heather Humphreys, who recommended  John McNulty for the board of the Irish Museum of Modern Art defended her choice in the seanad today

Heather Humphreys: “Fine Gael party officials made me aware of John McNulty’s interests in serving on a board under my remit. I looked at his experience in business, in culture and in promoting the Irish language. I made the decision that he could make a positive contribution to the board of IMMA and I stand over that decision. There’s been considerable focus, and you mentioned it here this evening yourself, on the Fine Gael official involved. I don’t see any benefit out of making a scapegoat out of a party official by putting their name into the public domain.

I am fully committed to using the public appointments process in the future, in line with new Government guidelines. There have been some suggestions from members of your own party, Senator [Thomas] Byrne, that I breached the size of the IMMA board by making the two appointments. The current limit of the IMMA board, according to its memo and articles of association is 15 members. I moved to make two appointments as I believed the two candidates could make a valuable contribution and improve regional representation. I was advised by my department that there were six vacancies on the IMMA board so there was no impediment to me making the appointments. As part of Government reform plans, it is intended to reduce the size of the number of boards under my remit on a permanent basis. Legislation is needed to give statutory effect to this change. And it’s expected that this legislation will be published in late 2015. The heads of bills are currently with the relevant committee for their consideration. Since the appointments, I have met with the chair of the IMMA board and I’ve committed to working more closely with him in identifying the skills needed for the board. Indeed, I look forward to doing this with the chairs of all our cultural institutions, as part of the Government’s new appointments procedures and I am formally writing to all the chairs, asking them to outline the skill set that best suit the relevant board.”

Thomas Byrne: “As usual, I would ask the minister to answer the question that I asked and she has failed to answer the questions, yet again. That is a travesty of democracy. I want to make clear, we’re not trying to make a scapegoat of any Fine Gael official, it is the Taoiseach and you that are making a scapegoat of an unnamed Fine Gael official. You are the minister, the Taoiseach is the Taoiseach, you are responsible for this mess, nobody else. We’re trying to get to the bottom of what went on and that’s why we need to know who it was before we make any other considerations in relation to this. You’ve muddied the waters further, minister, by referring to “officials” in your speech, in the printed text. Was there one official, were there more? Were there multiple people from Fine Gael headquarters coming to ask you to put this person on the board.

You have stated that the memo of articles of IMMA require 15 members, well your own Government announced previously that there were only nine in the future, it was open to you to actually stick to that. You deliberately overrode Government, your Government policy to have only nine members on these boards, regardless of what the IMMA said. Well I put it to you that these questions have not been sufficiently answered, your chance is here, I wonder will it be taken up in the arts committee, or in the Dáil, but I think minister, you’re running out of time because really these questions are very serious, very serious allegations and accusations were made in the Sunday Independent article about you on Sunday. I read some of them into the record. I wanted to ask you questions before I or my party made assessments along those lines but, minister, you are not helping the situation. We are not going to scapegoat anybody. We want, we want answers. And we want to know did you vote in the Seanad election and did you vote for Mr McNulty?”

Humphreys: “Well, thank you, Senator, but first of all, you know, voting. The great thing about this country is it’s a democracy and when you vote, you vote in secret. And that’s the way it will stay in that respect. And I am responsible for the appointments to the board and I did that based on merit, that’s exactly it, that’s what I’m responsible for. Now I have listened closely, in fairness I have, I’ve listened closely, I’ve taken the criticisms on board and I mean that, I’ve taken them on board over the last two weeks in relation to board appointments and I acknowledge, I acknowledge that this should have been done differently and I have already moved to put a new system in place, in my department and I will be following these procedures. So it was out of this respect, out of respect to this house, by the way, two weeks ago, that I came over here, at very short notice, and I was lacking maybe on that occasion and I apologise for that.”