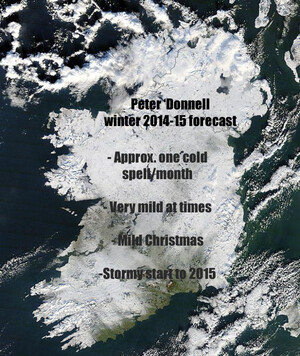 It’s going to be really cold.

“The overall theme will be large variations from some quite cold spells (expected about once a month) to very mild spells. This may be true of most winters to some extent, but I think it may stand out as the dominant feature due to the large differences involved.”
“I expect the colder portions of the winter (the next five months, that is) to be mid-November, a spell in early December, parts of early to mid January, and possibly a longer and more dominant cold spell late February into March. You can see from that schedule when the milder intervals are predicted, and this would include Christmas into New Years. A period around 4-7 January might be particularly volatile and provide some very strong winds as well as a sharp drop in temperatures leading to a brief wintry spell….

26 thoughts on “Here’s Peter With The Long Term Forecast”