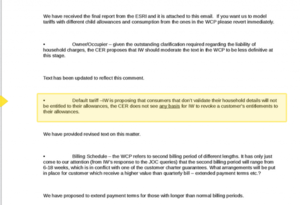 Part of an email sent by the head of the Commission of Energy Regulation’s Water Division Karen Kavanagh to Irish Water chief executive John Tierney, and others, on July 15 – outlining how “the CER does not see any basis for Irish Water to revoke a customer’s entitlement to their allowances”.

Yesterday, journalist Seán McCárthaigh, of The Sunday Times, reported how people who fail to register for their free Irish Water allowances will be forced to pay an annual bill of almost €425, irrespective of their household size.

But, he explained, this was something the Commission of Energy Regulation was against back in July.

“Asked about the U-turn this weekend, a CER spokesman said: “The email pre-dates our relevant water charges decision, which was subject to public consultation. In our decision paper we decided we would apply a default tariff with no allowances.”

“Document released under the Freedom of Information Act reveal that in a meeting with CER officials on September 5, Irish Water promised to consider “alternative ‘carrot’ rather than stick approaches” to encourage customers to register their household details early. It has also emerged that Irish Water will seek permission from CER for its first-fix-free policy for water leakages to be limited to households fitted with water meters.”

“In a further restriction on the number of customers who will be eligible for a free repair, Irish Water is planning to fix only external leaks, even though many leaks are within houses and apartments such as leaks in cisterns. Irish Water has estimated that up to 10% of households have some type of leak.”

Email in its entirety here

6 thoughts on “‘Carrot Rather Than Stick’”